Sessions with Spirit: A Journey Through Past Lives

Sessions with Spirit: Euler, da Vinci and Me

Sessions with Spirit: The Addams Family

Sessions with Spirit: Healing From Suicide

Sessions with Spirit: Meditating with the Universe

Sessions with Spirit: Euler, da Vinci and Me

Little did I know that the last mediumship reading I did in Manitou Beach before moving to BC in the late summer of 2017 would be tied to an encounter that would intrigue (and baffle) me for years to come.

During that reading an older gentleman came through with a longish white beard and clothing that indicated to me he was from a long, long time ago. I mentioned the man to my client thinking it could be a grandfather/great grandfather but my client couldn't validate this. I gave more details about the man; what he was doing and where he appeared to be living (alone, in the woods). When we neared the end of the reading my client said to me, "I think that was my mentor". Oh good I thought to myself, I'm glad we figured out who it was. My client then added, "Leonardo da Vinci".

I was skeptical (oh the irony). Could it be? Had I just seen the iconic artist and genius himself? To be honest I had difficulty believing I had communicated with someone of stature, but the reality is why wouldn't or couldn't this be? He was human and now in spirit form just like everyone else I communicate with during readings. I did a little research on da Vinci, but since I was in the process of packing and getting ready to move to another province, I let it go.

I arrived in British Columbia late afternoon on September 17th. On my first morning there (September 18th), I woke early and in a state I refer to as 'the in-between' - a state between wakefulness and sleep when I often have spirit communication and visions. In this state I clearly saw the infinity symbol followed by the number nine (9). There was something different about the infinity symbol however; it was not connected at the centre point. Instead it looked more like a chain link. I got out of bed and began to Google the infinity symbol. I clicked on the very first listed site (Wikipedia of course). One paragraph down and there it was: the unique infinity symbol just as I'd seen in my vision. The symbol was credited to one Leonhard Euler. I clicked on that and was redirected to his Wiki page. I began my descent down the rabbit hole. 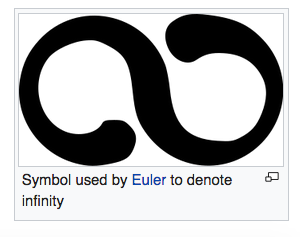 As I began to read about Euler, epic chills wracked my body. Deceased: September 18, 1783. (Today was September 18th.) What about the number 9? Gulp. Euler was involved in infinitesimal calculus, proving 0.999 is infinite.

While I had experienced visions in the past, the volume of these occurrences skyrocketed over the next couple of weeks. More visions came, always early in the morning between 3 am - 5 am: hints at his theories (which I didn't and still don't understand), the name of his grand/great grandchild, the names of his equations and other mathematicians he worked with. I read everything I could about him but much of his math/astronomy/science made zero sense to me.

The next morning he corrected me on how I was pronouncing his last name by showing me the letters Y-O-U one morning. (I was referring to him as Leonhard YOU-ler, but the correct pronunciation is OIL-er). Apparently he had a sense of humour.

As I continued to research Euler something started to get my attention. Leonhard's date of birth was April 15, 1707 and that date seemed familiar. I had looked up Leonardo da Vinci before leaving Manitou Beach and suddenly felt the urge to do it again. Both Euler and da Vinci were born April 15, albeit in different centuries. Hmmmm. New rabbit hole.

Da Vinci and Euler were not only connect by their date of birth and similar first names, they were inextricably connected by their mutual interest in physics. While da Vinci was responsible for the first recorded experiments on sliding friction, Euler was the first to provide detail on the coefficient of friction. Likewise on bending beams (Euler's beam equation). The clincher for me (because it was something I could actually understand) was their mutual love of platonic solids - specifically polyhedra. I knew all about the these shapes. They were sacred geometry. The next morning I was drawn to my cards. I drew my usual round of three cards. The card numbers were 27, 9, 36. I looked hard at the cards. Something was jumping out at me. I looked at the numbers again.

9, 9, 9. Euler's infinity. (Am I losing it?) Was he now sending me messages through my cards and numbers? This question would be answered as I felt a nudge to draw again. I put the first three cards back in the deck. I shuffled and the cards started to fall out, one by one. I kept placing them beside each other, one after the other until I felt the nudge to stop. I Googled 'number equivalent of letters' - or something to that effect, and eventually stumbled upon Gematria.

Gematria is an ancient Babylonian alphanumeric code that assigns a numerical value to a word/letter/phrase. It took a little while to decipher, but I ended up with this:

WTF (sorry but that was my reaction). Was Euler referring to being 'joined' to da Vinci? To me? Was he referring to a different wheel altogether (like the wheel of dharma or the wheel of Ezekiel, both of which were significant to me). My mind began spinning (no pun intended),

I had to break free of what was becoming an obsession that was verging on madness. Everywhere I looked there was a reminder of Euler. Every thought I had was another clue, a telepathic communication. I finally had a brief reprieve when I received a call to attend an interview at a winery in Kelowna. I was excited because the winery actually stored their wines in a pyramid that was built to precise specifications. How very cool…

At the panel interview the supervisor gave me his card as he introduced himself: Paul La Grange. Wait a minute. Didn't I know that name? Hadn't I just read about the Euler-Lagrange Equation. I left the interview and Googled to be sure, and yes, that mathematician would be one Paul Lagrange.

As a Medium, nothing like this had ever happened to me before, and hasn't happened since.

I was all in now. This mathematician was taking up all of my time. I had to check and re-check everything that was happening, but I also had to check in with family to ensure I wasn't on the brink of insanity. Why was this mathematician trying to contact me? Doesn't he know I suck at math?! What was he hoping for? Was I supposed to do something with all of this, and if so, what?

Just when it was becoming too much for me, the visions abruptly stopped. I waited a few days, reviewing my notes but not frenzied by more incoming information. (There was so much information and so many synchronicities that I could only share a few here.) I started to wonder just what had happened.

Since the fall of 2017 I have had flashes of insight as to why Mr. Euler was communicating with me. In fact I've had even more insight while writing this and reviewing the notes I'd taken during this magical time.

I know I need to explore communicating with him again, but we will need to mutually choose a time when I am both ready to receive and fully equipped to decipher what Mr. Euler wants to convey.

As I write this I have an enormous stye in my right eye. (Euler lost sight in his right eye.) And one final note: I returned to Saskatchewan on April 15th.